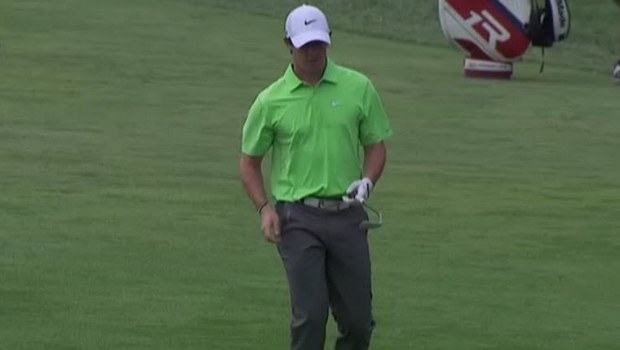 When Even the Pro Golfers Change Equipment

When Rory McIlroy signed his deal to represent Nike Golf much was made — and is certainly be said after this weekend — about the adjustments he would have to make as he transitioned into Nike clubs.

Would he still be as good a golfer as he was before the switch? Did he do it just for the money? Since it has been reported that he signed a 10-year, $200 million deal, I have to assume that money played at least some part in the change. Although it didn’t stop him from bending a Nike 9 iron in apparent frustration last year at the US Open.

Still, Nike clubs have always performed well for Tiger Woods and the rest of the Nike roster, so McIlroy should know that his less-than-stellar 2013 may be at least partially his fault.

The fact is that professional PGA Tour players are a lot like you and I. They come to rely on their equipment and have certain favorite clubs. Even if their new clubs are made perfectly to fit all their specs, the player still may not feel entirely comfortable.

And these professional golfers are exponentially more sensitive to their sticks — from shaft frequency, head shape, face angle and sound to the difficult to quantify “feel.”

But they are still like most golfers — always looking for something slightly better. Or in the case of the top pros, willing to take a chance for a big contract.

I have been fitting and making equipment for some of the top players in the world for more than 30 years, and I can tell you one thing: It is always a surprise what comments you get from the players.

“I love the new driver,” they’ve said, even though you know the composite shaft that was put in is different from the old one.

“I don’t like the look of the new putter,” I’ve heard, even though it was crafted to exactly match the previous stick.

“The leading edge needs to be softened more,” I’ve been told, even though the measured radius is rolled more than a tournament-winning previous set of irons.

“These feel light,” it’s been said, when you know the clubheads were ground to weight and swing weighted perfectly with shafts. Shafts that were sorted and weighed exactly to his specs.

In every case I’d make some adjustment to be sure that when he went into battle, the player knew his clubs were perfect for him.

Maybe you could say that. Sometimes you just can not get it right for the player. I worked with one Hall of Famer
in years past that was and still is one of the nicest gentleman you would ever hope to meet. Yet after multiple attempts at making clubs for him, he was never really satisfied.

Conversely, I have had another top, major winning pro that saw a set of irons that I was working on for someone else and immediately took a liking to them. He used them for many years on the PGA Tour.

Other golfers are perfectly satisfied with their clubs, as long as you annually check their loft and lie and maybe put on a new set of grips — although this example is rare.

Two legends of the game, Ben Hogan and Jack Nicklaus, had certain little things that had to be done to their drivers.

Ben Hogan during his historic 1950 US Open. Hogan won on a three-way 18-hole playoff.

At the Ben Hogan Golf Company, Hogan always insisted on having a small brass “shaft tip locking screw” installed in the through-bore tip of his steel driver shaft. This went back to his days at MacGregor Golf in the 1940s to the early 1950s when glue was not quite what it should have been (before epoxy was invented). The screw helped keep the shaft from coming out of the wooden head. Even years after epoxy was perfectly suitable to install a shaft, Hogan still wanted that little screw.

He said that it made the club feel better balanced. I know that when we made his driver, we always had to factor in that small screw to hit the swing weight he wanted.

Jack Nicklaus also had started with MacGregor early in his career, and his first professional driver had a butt weight of lead in the grip end of the shaft. This was a common way for mass-produced clubs in the 1960s to be counterbalanced and swing weighted with persimmon wood heads that were slightly too heavy.

Jack Nicklaus in 1976 at Glen Abbey Golf Club, the site of more than one of his Canadian Open losses.

We would never do this for professional Tour players, but Nicklaus’ favorite club was built that way — and he continues with this method of butt weighting even today.

So, in a way, even the supposedly most-rational weekend golfer can be compared to an all-time great.